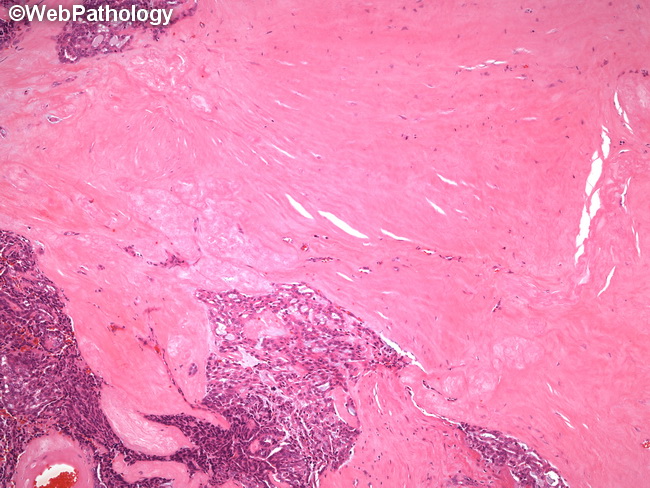 Comments:
This case of polymorphous low-grade adenocarcinoma (PLGA) had densely sclerotic stroma separating solid nests and trabeculae formed by the tumor cells. Molecular Genetics:Hotspot activating PRKD1 somatic mutations have been found in almost 73% of PLGA but not in other salivary gland tumors. These kinase-activating mutations are believed to be a driver of PLGA. Differential diagnosis: 1) Pleomorphic adenoma (PA): PA lacks the infiltrative appearance typically seen in PLGA. PA is usually p63+/p40+ whereas PLGA is p63+/p40-. 2) Adenoid cystic carcinoma (ACC): PLGA and ACC have overlapping histologic features; however, ACC has small, angulated, hyperchromatic nuclei in contrast to the round or oval vesicular nuclei of PLGA. ACC is p63+/p40+ whereas PLGA is p63+/p40-. ACC carries a recurrent t(6;9) translocation with MYB:NFIB gene fusion resulting in overexpression of MYB oncoprotein. PLGA lacks this abnormality. Treatment & Prognosis: Given that PLGA is a low-grade tumor with excellent prognosis, the treatment of choice is conservative surgical excision with clear margins. In rare cases, the presence of bone invasion may necessitate mandibulectomy or maxillectomy. If the cervical lymph nodes are not palpably enlarged, neck dissection is not performed. The recurrence rate is 10%-15% and the 10-yr survival rate is around 95%. Local recurrences may occur several years after initial resection. Regional lymph node metastases are found in 10%-15% of cases. Distant metastases and tumor-related deaths are rare.