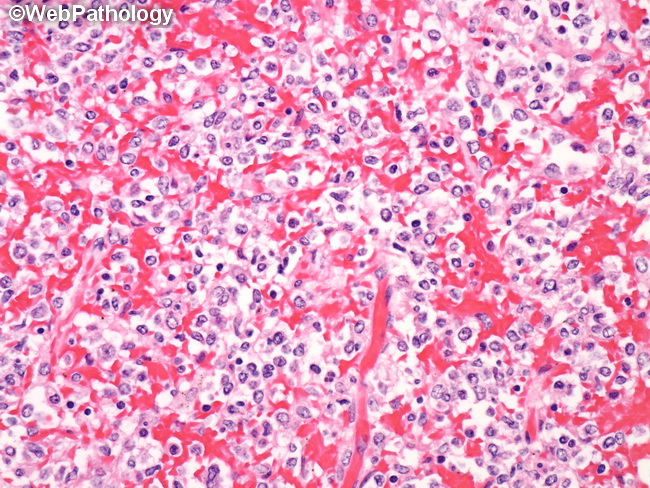 Comments:
Immunophenotype: The neoplastic cells of hepatosplenic T-cell lymphoma (HSTCL) have CD3+ T-cell phenotype and are negative for B-cell markers. They are CD3+, CD2+, CD5-ve, CD7+/-, and CD4-ve/CD8-ve. Most cases are NK cell-associated marker CD56+ but are negative for CD57. CD16 may be present. CD25 and CD30 are negative. The neoplastic cells have non-activated cytotoxic profile, with expression of TIA-1 (cytoplasmic, granular) but no reactivity for granzyme B or perforin. Most cases express gamma-delta T-cell receptor. Rare cases have alpha-beta phenotype; they appear to be more common in females.

Cytogenetics: Both gamma-delta and alpha-beta subtypes of hepatosplenic T-cell lymphomas (HSTCL) show isochromosome 7q (50% to 70% of cases) by conventional cytogenetics as well as by FISH. This is sometimes the sole abnormality, suggesting that it plays a central role in pathogenesis as well as further supporting the notion that gamma-delta and alpha-beta cases are variants of the same disease. Isochromosome 7q is not unique to HSTCL but has also been noticed in acute myeloid leukemia, acute lymphoblastic leukemia, myelodysplastic syndrome, rare cases of extranodal NK/T-cell lymphoma (nasal type), anaplastic large cell lymphoma, and Wilms' tumor. In cases that progress, there is trisomy 8 and loss of chromosome Y in addition to increased number of isochromosome 7q signals.