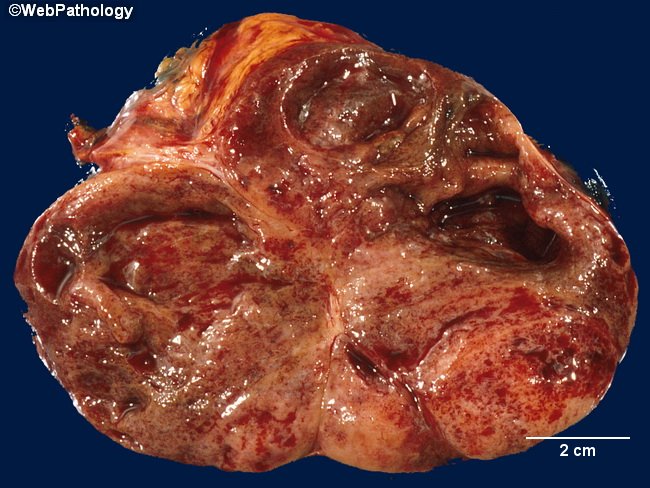 Comments:
This rather large pheochromocytoma (12 cm in largest dimension) has a mottled reddish brown surface with areas of hemorrhage, necrosis, and cyst formation. A portion of compressed adrenal cortex can be seen on the top just to the left of midline. Some of the features of pheochromocytomas can be summarized by the so-called "rule of 10s" which has also resulted in this tumor being labeled as the 10% tumor. About 10% of paragangliomas are extra-adrenal, involving locations such as head, neck, thorax, abdomen, and pelvis. The chromaffin cells at aortic bifurcation and the root of inferior mesenteric artery are called organ of Zuckerkandl and are a common site of involvement; 10% of sporadic pheochromocytomas are bilateral (in familial cases, bilaterality is seen in 50% of cases); 10% are malignant as proven by the presence of metastases; 10% are not associated with hypertension; and lastly, about 10% of cases occur in children. These so-called "rules of 10s" have been challenged by several recent studies.