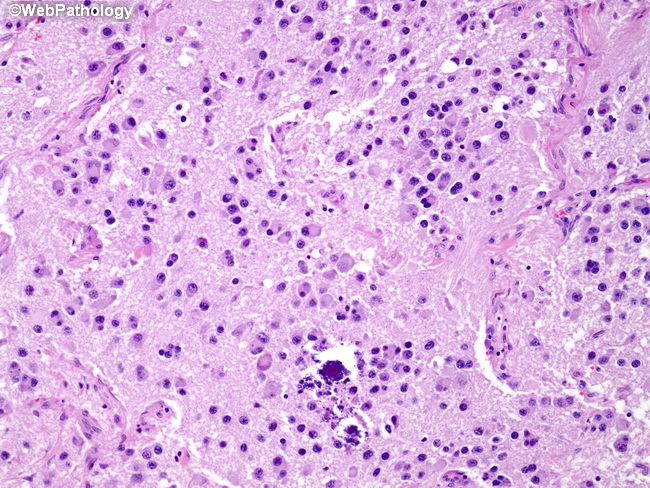 Comments:
Some of the commonly seen genetic alterations in neuroblastomas include gain of 17q (80% cases), amplification of MYCN oncogene (25% cases), and deletion of 1p (30% cases). All three are linked to adverse prognosis. Mutations in TP53 and RAS oncogene are rare in neuroblastomas. Germline deletions at the 1p36 or 11q14-23 locus are associated with neuroblastoma, and the same deletions have been found somatically in sporadic neuroblastomas. Germline mutations in ALK gene (2p23) have been found in familial cases of neuroblastoma which make up 1% to 2% of all cases. Somatic ALK-activating mutations are seen in 6% to 10% of sporadic neuroblastomas. Additional 3% to 4% have ALK gene amplification. This image is of a differentiating subtype of neuroblastoma. The differentiating neuroblasts are surrounded by abundant neuropil. A focus of calcification is also present.