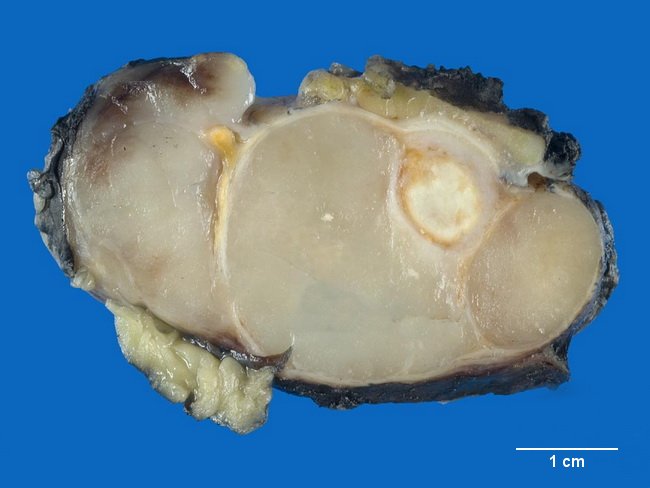 Comments:
Neuroblastoma and its related tumors - ganglioneuroblastoma and ganglioneuroma - are of neural crest origin. They can be found anywhere along the sympathetic chain located in the paravertebral region from the neck to the pelvis. The most commonly involved sites are adrenal medulla (35% of cases), retroperitoneum (30% to 35% of cases), posterior mediastinum (20% of cases) and pelvis (3% to 5% of cases). Rare cases are found in paratesticular, para-ovarian, inguinal, and cephalic regions. The less differentiated forms (neuroblastoma) are seen more commonly in the pediatric age group and frequently involve the adrenal gland. The more mature forms (ganglioneuroblastoma and ganglioneuroma) are seen in older age groups and are less likely to involve the adrenal gland and more likely to be found in mediastinum and retroperitoneum. The image shows a multinodular, grayish-white neuroblastoma in the adrenal medulla from a 7 y/o male. One nodule is necrotic. Image copyright: pathorama.ch.