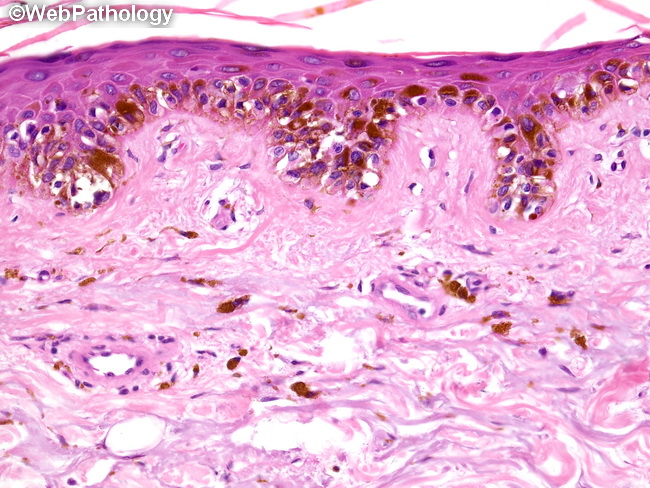 Comments:
Microscopically, lentigo maligna consists of confluent row or nests of atypical melanocytes arranged in the basal portion of the epidermis. Pagetoid spread is uncommon in early phase but may be seen when dermal invasion develops. The cells are often arranged perpendicular to the surface. The melanocytes show prominent artifactual retraction of the cytoplasm. Nuclear pleomorphism and multinucleation are frequently present.

The lesion extends into the hair follicles and sweat glands. Tangential sections through these areas or along deep portions of rete ridges can simulate invasion. Melanocytes often contain abundant pigment, but the amounts can vary.

Given that lentigo maligna develops in chronically sun-exposed areas of skin, the epidermis is usually atrophic and the dermis shows solar elastosis. Lymphocytic infiltrate and abundant melanophages in papillary dermis are additional findings.