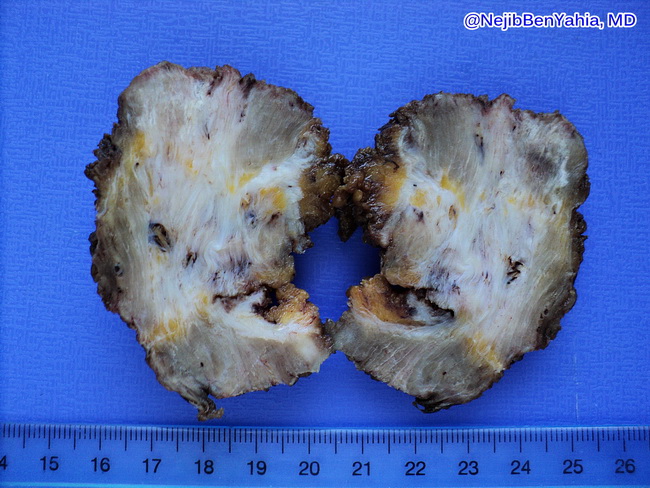 Comments:
Abdominal fibromatosis arises in the abdominal wall in women of child-bearing age. Some cases have occurred in children or adult men. The usual location is rectus abdominis or internal oblique muscles. It often occurs during pregnancy or within first year after childbirth. Its pathologic features are identical to those seen in other locations. The lesions do tend to be smaller and often less aggressive than extra-abdominal fibromatoses. The gross and microscopic appearance of abdominal and extra-abdominal fibromatosis is virtually identical. Abdominal lesions tend to be smaller, usually between 3 and 10 cm in size, and are less destructive than extra-abdominal tumors. When arising in the rectus muscle (as was the case in this patient) or its fascia, they usually remain localized and do not cross the abdominal midline. They are poorly circumscribed and have a whitish-gray, coarsely trabeculated surface closely resembling scar tissue. Image courtesy of: Dr. Nejib Ben Yahia, Djerba, Tunisia; Used with permission.