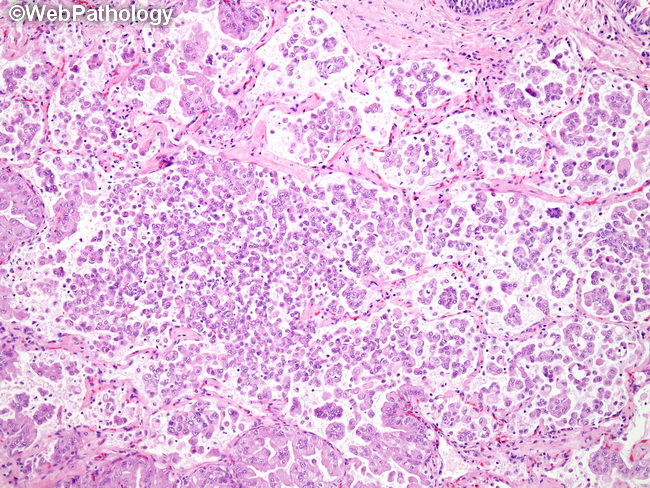 Comments:
Micropapillary adenocarcinoma of lung is a variant where the major tumor component consists of small, delicate papillary tufts lacking true fibrovascular cores. The micropapillary tufts are often shed and appear detached within alveolar spaces. The tumor cells are cuboidal with variable degree of nuclear atypia. In addition, there may be ring-like glandular structures in air spaces (seen in this case). Some cases show psammoma bodies.

Micropapillary adenocarcinoma of the lung is a highly aggressive variant with poor prognosis. It is a malignancy of older people that often presents at advanced stages, with intralobar satellite nodules, and frequently metastasizes to the contralateral lung, mediastinal lymph nodes, bones, and adrenal glands. One study has shown greater frequency of K-ras, EGFR, and BRAF mutations in micropapillary adenocarcinoma of lung as compared to other variants.