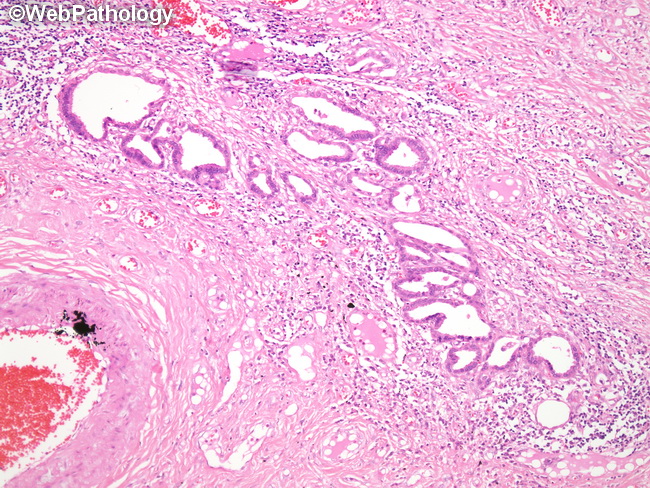 Comments:
In the 2015 WHO classification of lung tumors, minimally-invasive adenocarcinoma of the lung is defined as a small solitary adenocarcinoma measuring less than or equal to 3 cm with an invasive component less than or equal to 0.5 cm in greatest dimension. It has predominantly lepidic growth pattern. The tumor cell type is usually non-mucinous (type II pneumocytes or Clara cells), but rarely can be mucinous type. The invasive component can be acinar, papillary, micropapillary, solid, colloid, fetal, or invasive mucinous adenocarcinoma type. They are usually found incidentally on chest CT performed for other medical reasons. The survival rate is 100% with no recurrences if completely resected. Exclusion criteria: The diagnosis of minimally-invasive adenocarcinoma is excluded if one of the following is present 1) invasion of lymphatics, blood vessels, or pleura; 2) tumor necrosis; 3) tumor spread through air spaces. This image (higher magnification of the previous slide) shows a small invasive component consisting of a few well-differentiated glands infiltrating through desmplastic stroma. It measured 0.4 cm in greatest dimension. The remainder of the tumor was composed of non-invasive lepidic component.