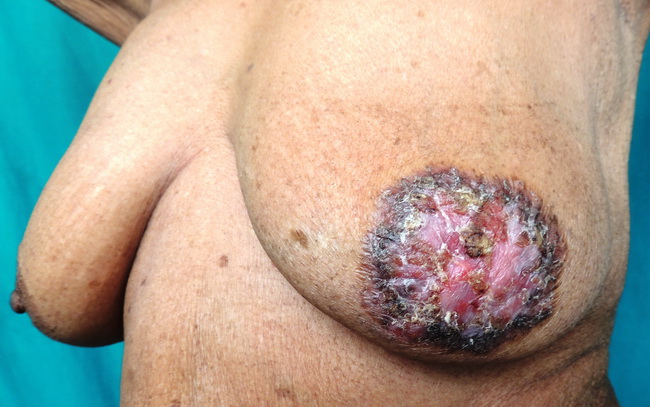 Comments:
Clinical Features of Paget disease (PD) of Breast: PD is generally seen in females in their 5th or 6th decade. Rare cases have been observed in ectopic breast tissue, supernumerary nipples, and even in the male breast. The involvement is unilateral in most cases. A palpable breast mass is present in about 30% of cases. The usual presentation of PD of the breast is with red or pink, eczematous, scaling, pruritic lesion of the nipple/areolar complex. As the disease progresses, there is bleeding, ulceration, and bloody or serosanguinous discharge from the nipple. The nipple can become deformed or inverted and may be completely destroyed in advanced cases (as shown here). In about 15% of cases, there are no nipple-related symptoms. Tumor nodules can appear in later stages. There are pigmented forms of PD (especially in males) which are frequently mistaken clinically for melanoma or eczema. Any eczematous/erythematous nipple lesion lasting more than a few weeks should be biopsied. If the diagnosis of PD is confirmed histologically, a search is undertaken to locate the associated neoplasm. Clinical History: The image shows an advanced case of PD of the breast in an elderly female. It measured 5 cm in diameter and consisted of scaly, itchy, crusting, ulcerated lesion with total destruction of the nipple. The lesion itself was indurated but there was no underlying breast mass and axillary lymph nodes were not palpable. The mastectomy specimen (see slide 5) showed a subareolar nodule with DCIS. No invasive tumor was found. Image courtesy of: Dr. Sanjay D. Deshmukh, Professor of Pathology, Dr. Vithalrao Vikhe Patil Medical College & Hospitals, Ahmednagar, India.