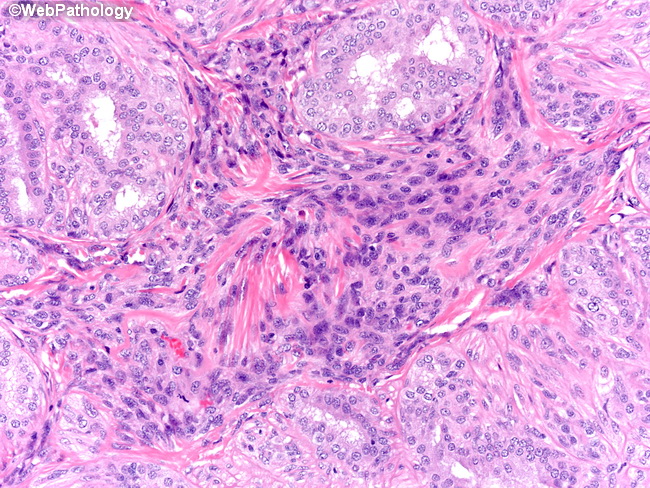 Comments:
The image shows a low-grade metaplastic spindle cell carcinoma. The epithelial component is represented by a low-grade ductal carcinoma. The diagnosis of metaplastic carcinomas is straightforward when there is a direct transition from epithelial to metaplastic elements. However, when the tumor is composed entirely of spindle cells, it must be distinguished from other spindle cell tumors of the breast, including primary sarcomas, Phyllodes tumors, and benign lesions like fibromatosis. Metaplastic spindle cell carcinoma, low-grade vs Fibromatosis: Metaplastic spindle cell carcinoma is a tumor of peri- and post-menopausal women. Fibromatosis is more commonly seen in women of reproductive age. However, this difference is not absolute and overlaps do occur. Fibromatosis shows no cytologic atypia, low mitotic activity, and positive nuclear staining for beta-catenin. However, it must be noted that nuclear beta-catenin staining has also been seen in almost 25% of metaplastic carcinomas. Role of p63: p63 is normally expressed in the nuclei of myoepithelial cells in ducts and lobules of the breast. It has been found to be strongly positive in vast majority of metaplastic carcinomas with high sensitivity and specificity. Invasive ductal carcinomas, the spindle and epithelial components of benign and malignant Phyllodes tumors, and breast sarcomas are all usually negative for p63. Ref: Koker M, Kleer C. p63 expression in Breast Cancer : A Highly Sensitive and Specific Marker of Metaplastic Carcinoma. Am J Surg Pathol 2004; 28:1506-1512.