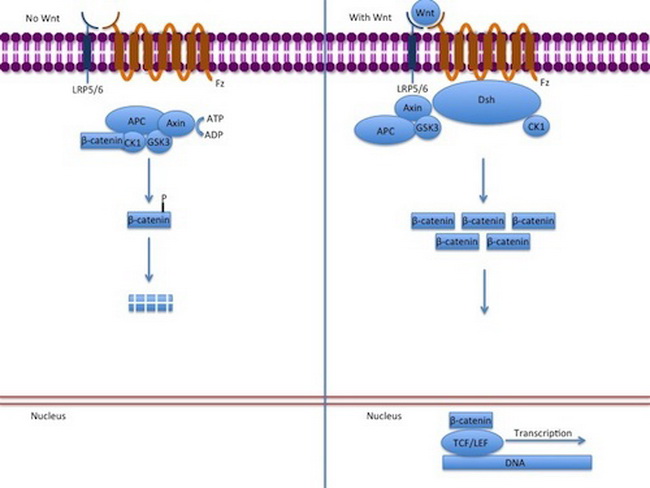 Adenomatous Polyposis Coli (APC) gene is a negative regulator of this signaling pathway. APC protein regulates stability and cellular localization of β-catenin. In the resting colonic epithelial cell (absence of WNT signaling), the APC protein binds to β-catenin along with axin, conductin, and GSK3b-serine threonine kinase and forms a "destruction complex" which is degraded by proteasomes. This lowers cytoplasmic levels of beta-catenin and prevents its entry into the nucleus.

In the presence of WNT stimulation of colonic epithelial cells, the destruction complex is blocked and beta-catenin is not destroyed causing its levels to rise in the cytoplasm. Beta-catenin translocates to the nucleus where it activates several cell cycle progression genes such as MYC, cyclin D1 and others which promote cell growth and tumorigenesis.

APC mutations: When APC is mutated in the β-catenin binding region, there is no down-regulation of β-catenin. The cells behave as if they are under constant stimulation by the WNT pathway.

β-catenin mutations: Mutations in β-catenin gene have the same end result as the loss of APC function. Mutated β-catenin protein escapes degradation by APC-dependent destruction complex, allowing it to accumulate in the nucleus and stimulate transcription of cell cycle progression genes.

Therapeutic Modulation of WNT-β-catenin Signaling Pathway: Experiments in mice models of FAP have shown that restoration of APC expression leads to rapid regression of adenomas and tumor cell differentiation. This approach would not be technically feasible in humans; however, modulation of WNT pathway could have the same effect and is being explored as a therapeutic option in FAP.