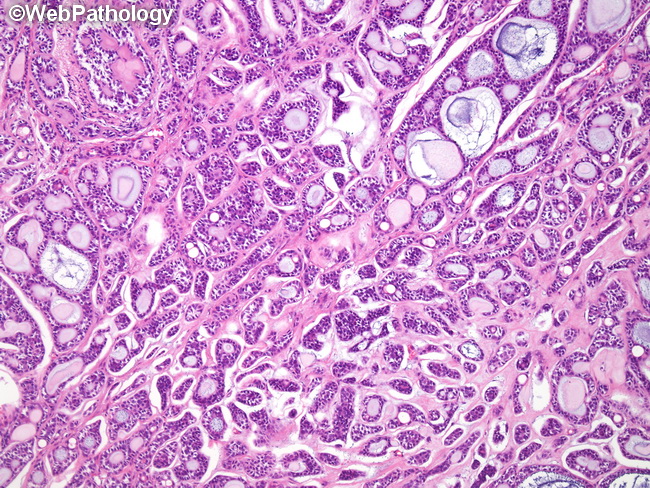 Comments:
The cell of origin of adenoid cystic carcinoma (ACC) is intercalated duct cell that is capable of differentiating along both epithelial and myoepithelial lines. A significant subset of ACC show translocation t(6;9)(q22-23;p23-24). This leads to fusion of the MYB oncogene to the transcription factor gene NFIB. The end result is deregulation of MYB expression and its target genes leading to tumorigenesis. The fact that all ACCs express MYB fusion irrespective of their location (salivary glands, lacrimal glands, ceruminal glands of the ear, breast, or upper respiratory tract) shows that this is a key oncogenic event in the pathogenesis of ACC. MYB (myeloblastosis oncogene) encodes a transcription factor that plays an important role in the control of cell proliferation, apoptosis, and differentiation. It is highly expressed in immature, proliferating hematopoietic cells and is down-regulated as the cells differentiate. It is especially not expressed in mature terminally-differentiated salivary gland cells. MYB oncogene is rearranged/duplicated in some human leukemias. NFIB is a member of human nuclear factor I (NFI) gene family of transcription factors. Interestingly, NFIB has also been identified as a recurrent fusion partner to HMGA2 in benign pleomorphic adenomas of salivary glands with t(9;12) translocations. In MYB-NFIB fusion, MYB exon 14 is linked to the last coding exon(s) of NFIB. The deleted portion of MYB is exon 15 which is a negative regulator of MYB. The MYB-NFIB chimeric transcripts are overexpressed leading to activation of critical MYB targets, including several genes associated with apoptosis, cell cycle control, cell growth, angiogenesis and cell adhesion. Due to alternative splicing and variable breakpoints, at least 11 MYB-NFIB transcript variants have been identified. Ref: Persson M et al. Recurrent fusion of MYB and NFIB transcription factor genes in carcinomas of the breast and head and neck. PNAS, Nov. 3, 2009; Vol. 106, no. 44, p. 18740-18744.