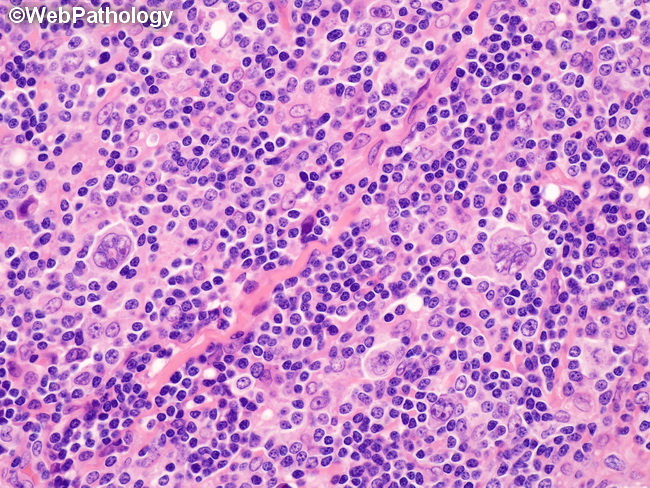 Comments:
Prognosis of Nodular Lymphocyte-predominant Hodgkin Lymphoma (NLPHL): NLPHL is an indolent, low-grade lymphoma with excellent prognosis in the majority of cases. The prognosis depends upon tumor morphology, the stage and patient age at diagnosis. Overall survival ranges from 40% to 99%. Nodular and B-cell rich patterns (typical patterns) are more common and present with localized disease that pursues an indolent course. For stage IA disease, the life expectancy is the same as that of general population. The more diffuse or T-cell rich infiltrates (variant patterns) frequently present with advanced disease with splenic or liver involvement, B-symptoms, and pursue a more aggressive clinical course. Recurrences occur in about 20% of cases, irrespective of the initial clinical stage. Multiple recurrences occur in about 27% of cases. The recurrence can be local/regional at the initial site (65%), in a different region (23%), or generalized (12%). NLPHL does not transform to other types of Hodgkin lymphoma. About 3% to 14% of NLPHL cases transform to diffuse large B-cell lymphoma (DLBCL). Rare cases of composite lymphoma with both NLPHL and DLBCL have been reported. This image of NLPHL shows several lymphocyte-predominant (LP) cells with complex, multilobated nuclei (popcorn cells) in a background of small lymphocytes. They have one or more basophilic nucleoli and scant cytoplasm. A few scattered epithelioid histiocytes are also present.