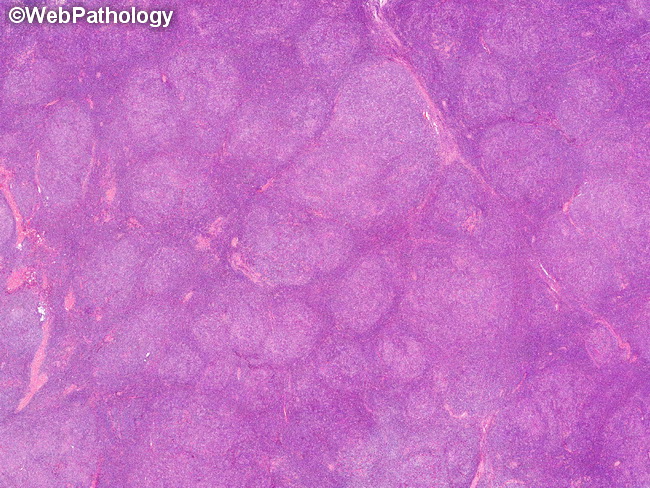 Comments:
Epidemiology: Nodular lymphocyte-predominant Hodgkin lymphoma (NLPHL) comprises 3% to 8% of all Hodgkin lymphomas in the Western hemisphere. Median age at diagnosis is 37-38 years and about 75% of patients are male. Majority of the patients (> 80%) present with Stage I or II disease. Familial cases have occurred and may be related to both genetic and/or environmental factors. Rare cases of NLPHL have been reported in children with Hermansky-Pudlak type 2 syndrome - a primary immune deficiency disorder associated with AP3B1 mutations resulting in impaired NK/T-cell function. EBV is generally negative, but may be positive in LP cells in rare cases of NLPHL. Clinical Features: NLPHL usually presents with long-standing lymphadenopathy involving (in order of frequency) cervical, axillary, inguinal, or femoral lymph nodes. Uncommonly, it involves mediastinal lymph nodes (7% of cases) or bone marrow (2.5%). Bone marrow involvement is associated with advanced stage, aggressive behavior, and poor prognosis. Extranodal sites may be involved, including liver, spleen, tonsil, parotid gland, and soft tissues. An association between variant histology and more advanced disease at initial diagnosis has been noticed. B symptoms are seen in only about 10% of patients. About 80% of patients present with an indolent disease in early stages and have an excellent outcome. This low magnification image shows typical nodular pattern (Pattern A) which is seen in about 75% of NLPHL cases.