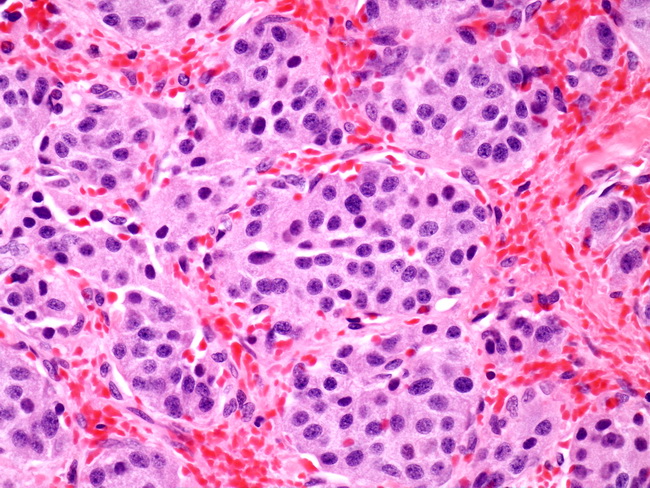 Comments:
Prognosis of Non-functioning Pancreatic Neuroendocrine Tumors (NF-PanNETs): The cure rate for NF-PanNETs is low. Between 55%-75% of cases behave aggressively, with extrapancreatic extension, distant metastases, or recurrences. Following surgical resection, the overall 5-yr survival rate is 65%-86% and the 10-yr survival rate is 45%-68%. The 5-yr survival for Grade 2 and Grade 3 PanNETs is 62% and 29% respectively. Pancreatic neuroendocrine microadenomas (tumors <0.5 cm) are considered benign with 100% survival.

The median survival time even after metastases or recurrence is several years. Since metastases can occur many years after resection of the primary tumor, long-term follow-up is necessary.

The most important prognostic factor in PanNETs is the proliferative rate as assessed by the mitotic count and Ki-67 labeling index. Tumor size also correlates with outcome. Tumors < 2.0 cm are indolent, where as tumors > 3.0 cm have a high risk of metastasis. . Patients with DAXX or ATRX mutations have a worse clinical outcome than those without these mutations.

The specific hormone/s produced by the PanNETs as well as the individual histologic patterns have no clinical or prognostic significance.

About this image: PanNet composed of nests of uniform tumor cells separated by delicate fibrovascular stroma.